As a part of Kentucky’s statewide wildlife management grant, the Kentucky Department of Fish and Wildlife Resources (KDFWR) is using Wildlife Restoration grant funds to restore and manage elk in Eastern Kentucky.

Elk once roamed the hills of Kentucky but by the mid 1850’s, none were to be found. In a true partnership effort, the Kentucky Department of Fish and Wildlife Resources, the Rocky Mountain Elk Foundation and the Shikar Safari Club joined forces to bring this magnificent creature back to Kentucky. An aggressive elk re-establishment program ensued. From 1997 to 2002, the Kentucky Department of Fish and Wildlife released a total of 1,556 elk that originated from Arizona, Kansas, New Mexico, North Dakota, Oregon, and Utah. Over 100 animals were released at 8 suitable sites in a 16-county elk zone. In 2009, the herd reached the project goal of 10,000 elk.

Wildlife Restoration funds are being used to maintain the herd at this desired level, and within the current 16-county zone, through managed hunting. A self-sustaining herd of approximately 10,000 wild elk now inhabit several hundred thousand acres of reclaimed coal mines in Southeastern Kentucky. Not only is the herd biologically viable, but it has produced significant economic benefits to the local communities.

Much of the occupied range is open to public access for viewing and hunting opportunities via access agreements with the KDFWR. Several entities, including state parks and private vendors, operate elk viewing tours and organize special events featuring elk viewing for a variety of user-groups. The number of commercial hunting guides for elk hunting has increased annually. Since the first elk hunt in 2001, the number of hunting permits has increased and is now up to at least 800 annually.

Kentucky’s Elk Restoration and Management project is a perfect example of how a “user-pay, user-benefit” program works. The hunters are the ones who pay into the Wildlife Restoration program and they are now reaping the benefits of a healthy elk herd to hunt in Kentucky. 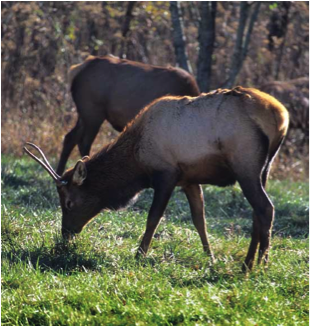