Wild Rose State Fish Hatchery is critical to Wisconsin’s $2.3 billion sport fishery. It produces for stocking statewide 27% of trout and salmon, 64% of northern pike and most of the lake sturgeon and spotted musky. This hatchery is particularly important to provide great Lake Michigan fishing because more than 94 percent of fish raised at Wild Rose are stocked there.

Wild Rose has been a workhorse for Wisconsin’s fish propagation system since the state bought it in 1908. But the century-old hatchery’s ability to continue meeting that stocking demand was threatened by aging facilities and water supply problems. Fish production was decreasing and the hatchery violated environmental laws written since the facility was built. Plans were developed to renovate the hatchery in phases. What was needed was a facility to meet the needs of the 21st Century – needs that recognize the genetic diversity of fish populations and needs that must cope with emerging disease issues like viral hemorrhagic septicemia (VHS). Essentially two new facilities would be built – a cold water hatchery for trout and salmon and a cool water hatchery for northern pike, spotted musky, walleye and lake sturgeon.

Phase 1 of the renovation to build the cold water hatchery was begun in the summer of 2006 at a construction price tag of $15.9 million. This phase was funded by Sport Fish Restoration funds, money from environmental restoration agreements reached with paper companies on the Fox River and anglers’ license dollars. Included in this part of the renovation was the construction of a cold water nursery building for egg incubation and early rearing, a broodstock building, four covered production raceway buildings, new water supply, distribution and water reuse systems that bring the water supply into compliance, a new consolidated, state-of-the-art fish rearing wastewater treatment system to meet or exceed current discharge standards and a visitors center. The first fish were moved into the raceways in the spring of 2008.

Construction of Phase 2, the cool water portion of the hatchery, began in June, 2008 at a construction cost of $17.7 million and should be completed by August 2009, allowing for cool water fish production the spring of 2010. Sport Fish Restoration funds and anglers’ license dollars will pay for this part of the renovation. The major goals for phase 2 are the construction of a cool water nursery building for egg incubation, hatching and early rearing and the ability to rear fish under intensive, recirculation conditions, the construction of 14 modern rearing ponds and construction of a water supply and distribution system that includes a high capacity well. A water reuse system will take water from the cold water side of the hatchery that has been filtered and disinfected with ultra violet light for use in the new cool water facility. A new wastewater system will clean water leaving the hatchery to the highest level possible before releasing the water to the Pine River, a Class 1 trout stream.

The third and final phase of this project should be completed by the end of 2011. This will include the restoration of the wetlands, springs and headwaters of a stream that were on the site before the old hatchery was built more than a century ago. A backup groundwater well will also be constructed to supply both the cool and cold water sides of the hatchery.

When this renovation project is completed, Wild Rose will be a state-of-the-art hatchery facility with greater efficiency and flexibility, and increased environmental protection. The hatchery will produce healthier fish, and will be able to increase production of trout and salmon by about 15 percent and will be able to nearly double its production of northern pike, spotted musky, lake sturgeon and walleye. 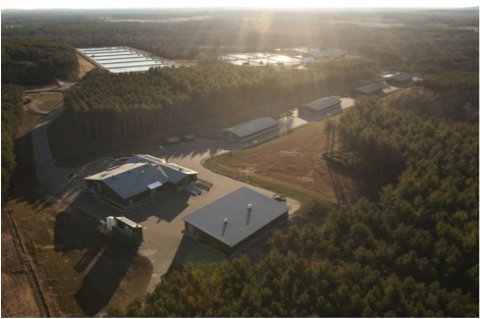